"...The Africa Enterprise Fund founded by Mo Ibrahim will seek out promising companies in financial services, consumer goods, energy and agricultural processing. The aim is to focus on established businesses that need cash and experienced management to grow, and the average investment is expected to be around $20m....",Economist.
Posted by Nii Simmonds at 3/27/2008 3 comments:

American inventor has developed a solar powered flashlight called BoGo. The first flashlight of it's kind in the world; should be of great use and lead to a reduction of pollution in emerging markets. They are offering a buy 1 get 1 deal, kind of like what MIT media lab has done with their OLPC.

Based in Douala, the economic capital of Cameroon, port city and main point of entry to the CEMAC region, the Douala Stock Exchange is both the standard bearer of the national economic and financial community, and the result of the determination of the Cameroonian Government. The Douala Stock Exchange is a public limited company with a Board of Directors and capital of 1.8 billion francs cfa, of which 63.7% of the shares are held by private commercial banks, Credit Foncier of Cameroon and the Dutch bank FMO, 23% by public interests, and 13.3% by private insurance companies.

Operating in an economic environment which has been reformed by an ongoing restructuring of the financial system on the one hand, and a promising business climate resulting from the liberalisation of the market sector on the other, the aim of the Douala Stock Exchange is:
- To enhance and diversify the availability of finance
- To facilitate privatisation programmes and the granting of credit
- To widen the range of investment possibilities available to the public and to institutional investors
- To ensure the transparency of economic and financial information.

The ambitions of the Douala Stock Exchange are in line with the general economic development of the country: steady growth of 4% in real terms of GNP for the past 5 years, consumer price inflation of around 2%, a reduction in the current account deficit and a reduction in external debt.
Posted by Nii Simmonds at 3/27/2008 1 comment:

d.light design is a social enterprise dedicated to bringing modern lighting and power to underserved populations including 1.6B people currently without electricity globally.

The d.light series is a revolutionary product line of affordable and energy-efficient power and light solutions. Using cutting-edge technology from Silicon Valley and unlike anything else currently on the market, the d.light series provides an economical and high quality replacement for kerosene lanterns, candles, and emergency lanterns.

100% Customizable
We are able to customize our specifications to meet the needs of our distributors for high volume orders. Product color can also be customized.

The proposed see-saw could light a classroom after five minutes

BBC has an article on using human -power to power African schools.

A young inventor is hoping to tap the unbounded energy of children in a playground to power schools in Africa.

The device works by transferring the power, created by a child moving up and down on it, to an electricity storage unit via an underground cable.

The Coventry University student has won £5,500 in funding to develop the idea.

E.services is a BPO provider in Accra, Ghana.

e.Services is a provider of premium outsourcing solutions that can transform your customer contact and back office services into a sustainable, competitive advantage. We recognize that your customer relationships are your company’s greatest asset. Our unwavering customer focus, superior technology, and commitment to operational excellence set us apart.

Making a phone call is something that many people take for granted. Yet millions in rural villages around the world simply do not have easy or affordable access to a telephone. The Village Phone concept was developed precisely to help extend access to telecommunications beyond the urban areas.

Started by GrameenPhone in Bangladesh -- a client of IFC, IFC is now working with MTN (also an IFC client) and other partners to replicate the Village Phone concept in several African countries, starting with Nigeria.

IFC also collaborated with the Grameen Foundation and other partners to create a Village Phone Replication Manual -- essentially a 'how-to' resource for setting up a Village Phone project.

FT - A study in African ingenuity

Financial times wrote an article about management education in emerging markets, particularly the African market. The top business schools in the west have always flocked to India and china, today they are looking at Africa. Management education brings an established set of criteria that one can use to help run or sustain an enterprise. Africa's growth has been in the double digits due to commodities and globalization.

This growth has fueled the need for badly needed management education and world class business schools. Africans values education and some are starting to realize the need to learn the global business language is crucial for Africa to move forward. I see many of the western business schools to engage in joint-ventures with Africa universities for this type of education.
Posted by Nii Simmonds at 3/24/2008 No comments:

Far from being a follower, Africa is setting industry benchmarks in cellular innovation and technology. One example of this is Celtel's world's first borderless network, which allows its cellular subscribers to make calls across 6 countries in Africa without roaming fees.

With a long-standing relationship dating back to 1999, IFC has made a series of investments totaling US$417 million in Celtel operations in 14 countries of which, US$131 million in
syndications under the IFC B loan program.

IFC's support of Celtel in its development from a small start-up company into the large corporate entity it is today, is a reflection of IFC's commitment to a true partnership with its clients.
Posted by Nii Simmonds at 3/21/2008 1 comment:

Uganda Management Institute (UMI) is the national centre for training, research and consultancy in the field of management and administration.

The Institute is located at plots 44-52 on the Kampala-Jinja Road about two miles from the centre of Kampala. The Institute began training operations in 1969 under the name Uganda Institute of Public Administration. The Institute is governed by a Council with a Chancellor as the titular head of the Institution. | read more »

Bidco Oil Refineries Ltd. was originally established as a manufacturing organization, committed to using the most efficient modern technologies to produce a superior range of products.

Over the years, Bidco successfully won over the market, becoming, the largest and fastest growing manufacturer of vegetable oils, fats, margarine, soaps and protein concentrates in East and Central Africa.

The market success of these products has led Bidco to look to the future and expand its horizons. As the company expands its network across Africa it has evolved into a Marketing Organization. Currently, Bidco market the largest and widest range of quality edible oil and hygiene products in East and Central Africa.

Bidco has a vision for the future. Producing high quality, popular products, we are now determined to become the Market Leader throughout Africa by 2030

The 3rd International Conference on ICT for Development, Education and Training - May 28 to 30 2008

eLearning Africa addresses the whole of Africa. A rotating event hosted by a different African government every year, it supports and reinforces the growing pan-African eLearning community. Through its Open Call for Papers, resulting in the engagement of a widely distributed international community of experts, industry partnerships, governments, initiatives on the ground, and the development partner community, a solid capacity-development framework has been established.

Dangote's primary activities are manufacturing, imports, packaging and nationwide distribution. In line with the Nigerian Government's stated objective of driving economic growth, import of raw material will gradually be replaced by manufacturing or cultivating of these materials within Nigeria.

The Group’s interests are diverse, the most significant of which are the manufacture of fast-moving consumer goods such as sugar, flour, salt and spaghetti / macaroni. Additionally, the Group has made huge investments in the Nigerian cement industry ranging from import terminals with bagging plants, polypropylene sack factory, several greenfield projects and some rehabilitation projects at Benue Cement Company Plc.
Posted by Nii Simmonds at 3/05/2008 No comments:

TRANS-CENTURY is an investment group that pools resources and ideas and participates in existing and emerging opportunities. It exists to create wealth and boost value for its shareholders by the systematic application of sound investment principles.

Boston Globe has a great article about how the third world adopts and embraces technology that developed countries don't have yet. Tom Friedman in his book, mentions technology has made the world flat and developing nations are using technology to enhance growth. The Internet and the mobile phone has shrunk the world, enable cheaper communications and now enabled commerce by mobile phone. 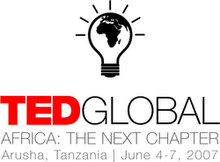